The Fitzhugh china pattern originates from three representatives of two generations of Fitzhughs of the English branch who became sea captains and even a Director of the British East India Company. Senior officers of the EIC were allowed to trade on their own account, and during the period 1704-1790s they shipped much of the pattern to England. For more information see an article by J.B.S. Holmes in the American magazine “Antiques”, January 1966, pp.130-1; also Spode’s Willow Pattern and other Designs after the Chinese, Ch. 14, The Chinese Trophies and Fitzhugh Patterns, Robert Copeland, 1990.

The left picture is a new plate in the blue Fitzhugh pattern. Spode, who produce these plates have recently stopped producing new plates, but antique plates are collected and can be obtained from dealers (or, if you are really lucky for bargain prices at car boot sales!). The right picture is an original hand painted Chinese export plate. Charleen Oerding (hotomy@hevanet.com), is in touch with some dealers who trade in Fitzhugh China. 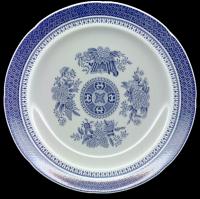 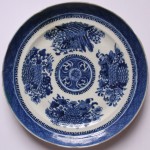